Two cities captured our hearts: One was vibrant and lively, the other charming and picturesque.

MADRID
STAY
Iberostar Las Letras Gran Via is centrally located at the gateway to the Las Letras neighborhood, which gets its name (it loosely translates to “The Letters”) because of the area’s propensity for attracting writers during the Golden Age of Spanish theater and literature. To this day, the property in this literary neighborhood continues to attract writers and book lovers. The historical building, dating to 1915, was originally the home of an architect and transformed into a hotel in the 1980s, and today it honors its neighborhood’s name by featuring various poems throughout the property that are hand-painted on the walls—there are 121 poems in total. This 109-room hotel features uniquely designed accommodations, and if we had to pick one place we’d love to call home, we’d go for the 2-story suite, complete with its own alfresco deck. Hotel features include a rooftop terrace that transforms into a bar each spring; a cozy library with books left by authors and guests; a fitness center; and three restaurants. Don’t skip out on having pan con tomate (bread with tomatoes) at Gran Clavel, traditional Spanish tapas at the wine bar, and a vermouth tasting at the Vermuteria. Room rates start at $82.

Dine
A must is dinner and a show at El Corral de la Moreria, where guests are treated to a traditional flamenco show complete with live music while feasting on traditional Spanish tapas, paella, local wines and much more. El Corral de la Moreria is frequented by a host of celebrities including Harrison Ford, Nicole Kidman, and Liza Minnelli—as guests walk in they can take in the wall of fame.

Do
Take a stroll through Retiro Park and make sure to check out the Palacio de Cristal (Crystal Palace) while you’re there; then head to Puerta del Sol and don’t miss your photo-op at the Origen de las Carreteras Radiales—the point where all of Spain’s major roads and highways meet. Other must-sees include Palacio Real, El Mercado San Miguel for lunch, and the trendy neighborhood Malasana.

Hidden Gem
After breakfast at the hotel one morning, a few of us took a stroll to the Chocolateria San Gines for a taste of its famous churros and hot chocolate—it definitely lived up to the hype. Here’s a tip: Because of its popularity, this 24/7 locale attracts huge crowds—our 10 a.m. arrival was met with no lines, but late one afternoon around 5 p.m. we saw lines wrapped around the block. 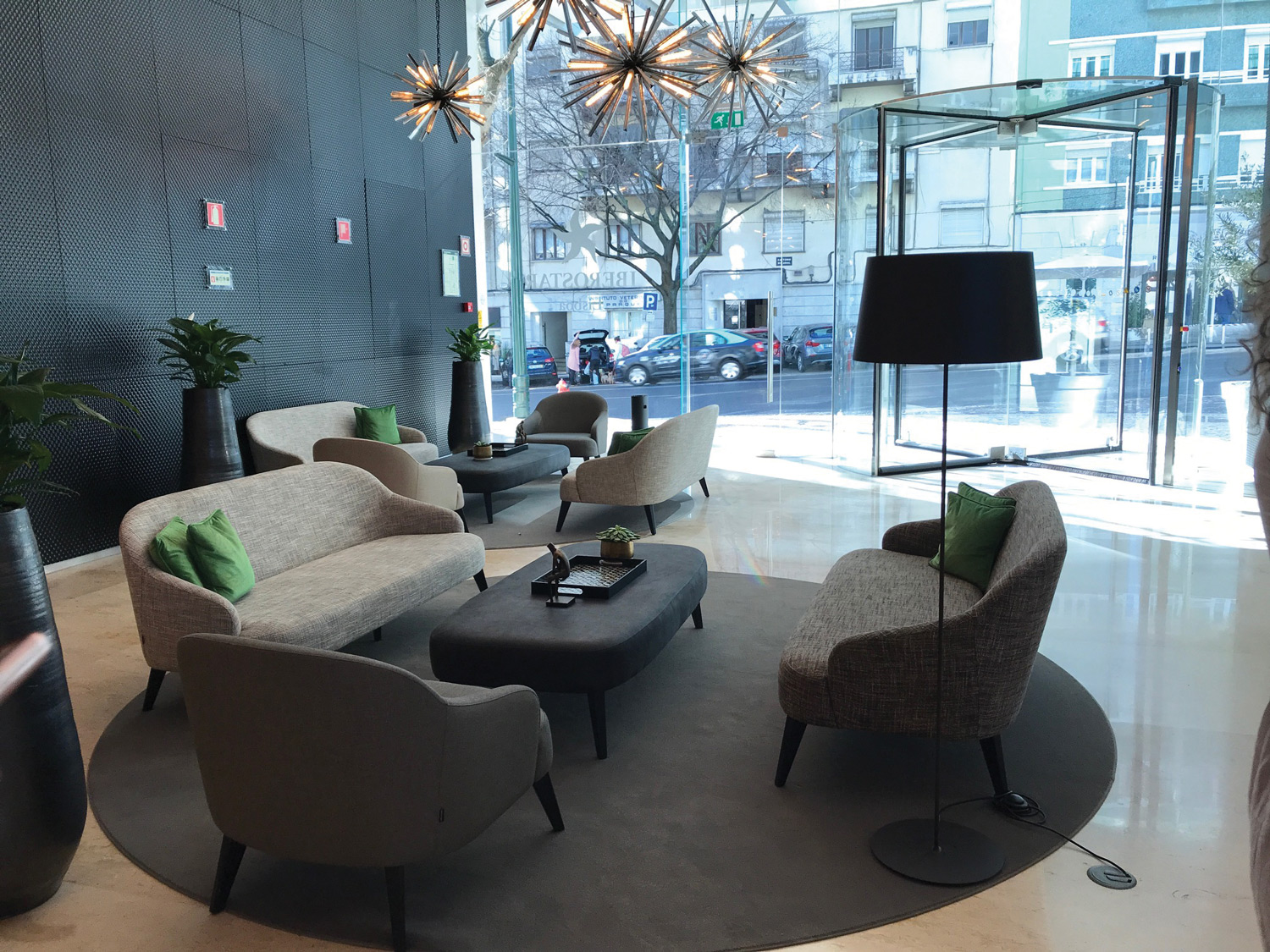 LISBON
Stay
Iberostar Lisboa greets guests with a welcome champagne cocktail in its posh lobby, home to a bar serving drinks and snacks, as well as early morning breakfast. At this modern-style property, with Minimalist decor, each uber-luxe guestroom is equipped with a smart phone that guests can use throughout the day to make local and international calls, post on social media, and find out where to go in the area. The 166-room property, which opened in October 2017, houses a spa with a hydrotherapy water circuit, a gym, a pool, an outdoor terrace, and an onsite restaurant, Restaurante Luz. Room rates start at $68.

Dine
Dinner at Rio Maravilha in the LX Factory area, a former textile factory from 1845, offers tasty fusion cuisine amidst a hipster vibe. Beyond the cuisine, there are board games, live music, and a terrace with views of the Tejo River. The trendy LX Factory area,
a place artists now call home, is replete with restaurants, bars, shops, and creative spaces. It’s known as one of the city’s coolest hangouts.

Do
A trip to Lisbon isn’t complete without heading to Belem, where guests can visit Monasteiro dos Jeronimos and Torre de Belem—both are UNESCO World Heritage sites. A must is taking a bite from a pasteis de Belem, a tasty pastry dating back to an 1837 recipe from the monastery. Don’t miss the Time Out Market showcasing 24 restaurants, eight bars, a dozen shops and music. Some of the city’s best are showcased here, so stop for a meal or a cold beer, but definitely take in the vibe.

Hidden Gem
Alfama is the oldest neighborhood in Lisbon, one that survived the earthquake of Nov. 1, 1755, which was followed by a city-wide fire, and several tsunami waves. According to our guide, about 19 percent of Lisbon was completely wiped out, but Alfama received minimal damage. Our guide surprised us with a stop at his favorite place in the city—the Lookout of the Holy Saint of the Hill. Here, you’ll get 180-degree views of Alfama.

Click here for the Eye on the World on Lisbon and Madrid.