The more difficult a destination is to visit, the more that I seem to be drawn to it. Fortunately, my older son shares this desire. So when my husband and I gave him a bucket list trip to Antarctica as a high school graduation gift, he was wholeheartedly on board. 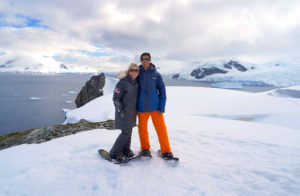 There was just one problem. I’m especially prone to seasickness, and the mere thought of having to cross the wild and raging waters of the Drake Passage from South America to Antarctica made my stomach churn. Enter Antarctica 21, one of only two cruise operators (the other is Quark) that flies its passengers to the continent. Antarctica 21 was the first to pioneer this premium service in 2003. Today, it offers over 20 air-cruise departures each season aboard two different ice-class expedition vessels, the Ocean Nova and Hebridean Sky. In November 2019, it will add a third ship, the sleek Magellan Explorer, and a new itinerary.

We opted for the 8-day Classic Antarctica itinerary on the Ocean Nova. The 239-ft. ship has the capacity for 46 crew members and 72 passengers. Our fellow passengers represented 11 countries and more than half were visiting their seventh continent. 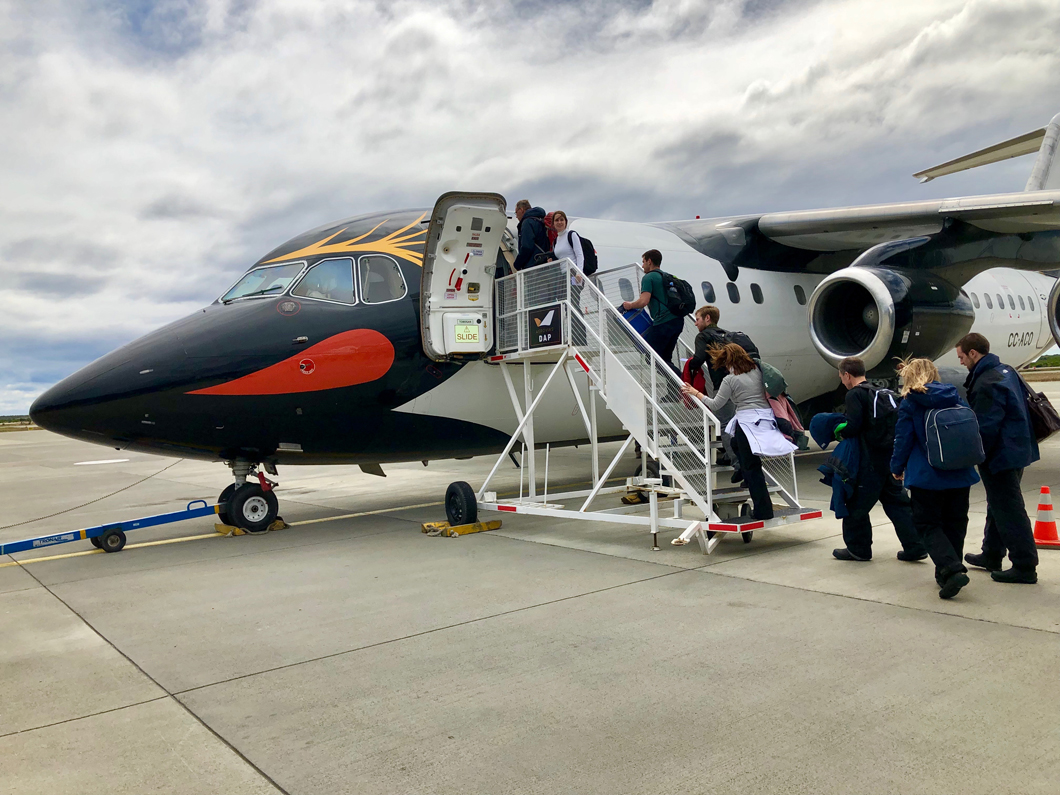 Getting There
Saying that getting to Antarctica is challenging is an understatement, but the journey is part of the experience. Your clients will fly to Santiago, Chile and then on to Punta Arenas located near the tip of South America. When they arrive, they’ll be greeted by a representative from Antarctica 21 who will transfer them to Hotel Cabo de Hornos.

Ideally, they’ll fly from Punta Arenas on a DAP Airlines charter flight sometime the following day. I say “ideally” because it’s not a given. These flights are completely weather dependent, and as you might image, Antarctica can have unpredictable weather. Antarctica 21 has a 4-day contingency plan, meaning the company tries to get passengers to the continent for four days. If the weather doesn’t cooperate, the trip is cancelled, and your clients’ money is refunded. Travel insurance is required.

We were fortunate and flew out at our scheduled time on the first day. DAP operates a regular commercial flight. In fact, it’s nicer than most American carriers with complimentary chocolates when you board and a full meal during the short, 2-hour flight. Plus, the planes are painted like penguins. We landed on a gravel runway at Frei Station, a research base on King George Island near the Antarctica Peninsula. It’s a short walk from the airstrip to the shore, where the ship awaits.

What to Expect on Board?
My son and I found our cabin on board the Ocean Nova to be quite comfortable. Our room was set up with two twin beds with the option of pulling down two additional bunks overhead. While you may be able to fit four people in a cabin if you had young children, I wouldn’t attempt it with teens. In addition, there’s the issue of storage. While we had plenty of closet space for two, four would have been pushing it. And keep in mind, your clients will have lots of outdoor gear with them—jackets, snow pants, hats, gloves and company-issued boots. Each cabin has a private bathroom with a shower, toilet and sink.

How’s the Food?
I have sailed on three big ship cruises and four expedition cruises. Of them all, Antarctica 21 has the best food, hands down. That’s an especially noteworthy feat when you consider the planning and logistics involved in an Antarctica cruise. No one is running to the grocery store in port for a forgotten item. Truly, the food quality was exceptional—from the mushroom souffles to the Caribbean lobster to the Baked Alaska and dozens of other mouth-watering desserts. There are selections to satisfy ever palate and dietary need.

Antarctica 21 strikes the perfect balance between speed and service. Breakfast and lunch are served buffet-style, so you don’t have to sit through a lengthy table service. At dinnertime, salads and soups are available on the buffet, appetizers are preset at the table, and entrees and deserts are served. Each night, there’s a choice of three dishes—meat, seafood or vegetarian. All are equally delicious.

In addition to the three meals, passengers can indulge in an early risers’ breakfast of fresh pastries, afternoon snacks and evening hors d’oeuvres. My always-hungry son was more than satisfied. Beverages, including lattes and espressos, are complimentary and available all day. Chilean beers and wines are served with dinner. Any other alcohol can be purchased. 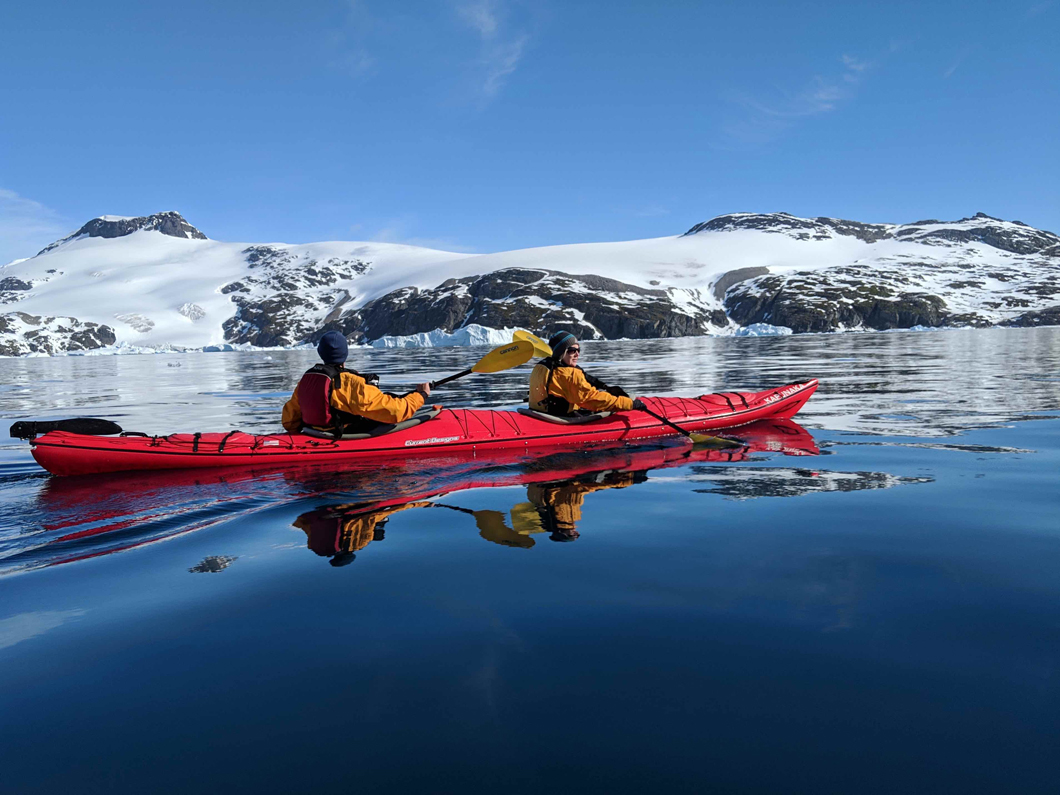 What to Do?
One of the most frequent questions that I’m asked is, “What is there to do in Antarctica?” Plenty. However, it’s unlike any other cruise that your clients may haven taken. There are no ports of call because there are no ports. This cruise is for those who enjoy the wonder of nature.

Passengers have at least two excursions each day—one in the morning and one in the afternoon. Some will be landings where they can take short hikes; some will be Zodiac rides where the guide will search for wildlife or navigate through spectacular ice formations. Additionally, passengers can kayak or snowshoe for an extra fee.

The wildlife viewing in Antarctica is extraordinary and only equal to a previous trip that my family took to the Galapagos Islands. First, there are the whales—more whales than I’ve ever seen. We were fortunate to have one sighting of a pod of orcas playing on the bow of the ship and several sightings of humpbacks that breached and jumped repeatedly. Passengers also see countless bird species and different kinds of seals lazily lying on ice floes. 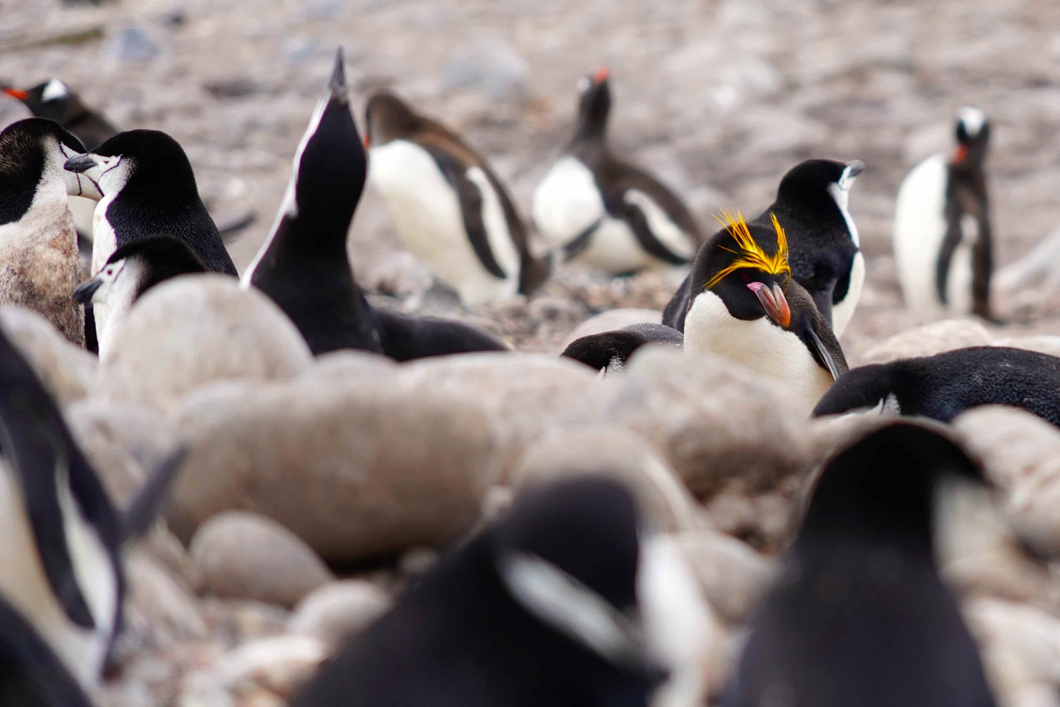 But the stars of the show are the penguins. We visited several locations that had colonies of penguins—mostly gentoo. We also had one landing where we saw four different species in one colony—gentoo and chinstrap plus a single adele and a single macaroni penguin, my favorite. But nothing compares to what we witnessed at Baily Head on Deception Island, the site of the largest chinstrap colony in Antarctica—106,000 penguins! I’m not easily wowed, but as I walked in the valley at Baily Head with masses of penguins clinging to the rising cliffs on one side and the mountainside on the other, I was in awe. This isolated colony with its cackling birds and newly born chicks was the most amazing nature experience that I’ve ever had. My hard-to-impress teen also was left speechless. This one landing was worth the journey to Antarctica alone.

I should point out that no itinerary in Antarctica is fixed. One cruise on the Ocean Nova will be different from the next. Landings are determined by weather and sea conditions. Even the expedition team is uncertain of where they’ll be taking passengers until they get there. Staying flexible is the key. So while clients may not get to go to Baily Head on their voyage, they’ll still see sights that will amaze… guaranteed.

This story originally appeared in KidTripster.com, which provides expert information & inspiration to families traveling with children anywhere in the world.